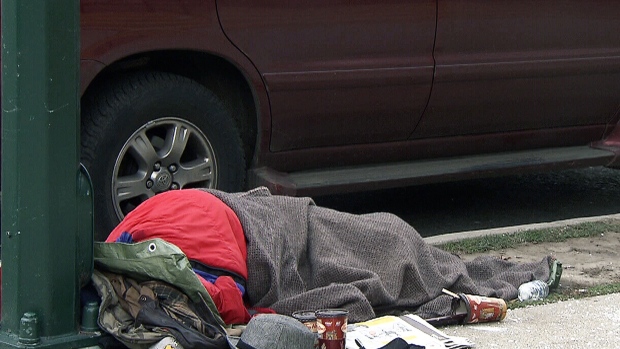 OTTAWA — A new report on homelessness proposes nearly doubling federal spending on affordable housing over the next 10 years to effectively eliminate the problem.Two groups — the Canadian Observatory on Homelessness and the Canadian Alliance to End Homelessness say — that would effectively make homelessness rare, brief and non-recurring.The report, submitted in advance of a promised Liberal national housing strategy, recommends that proposed federal spending of about $22.6 billion over the next 10 years be increased to about $43.8 billion.

It says the increase would amount to an additional $50 per capita annually.The report also says the spending strategy would help end a problem that costs the Canadian economy more than $7 billion a year.The federal government has already promised to increase spending on affordable housing, but the two groups say those increases don’t go nearly far enough.”It’s great to know that Canada is coming back to a national housing strategy,” said Stephen Gaetz, the observatory’s director.”This is an opportunity to correct more than 25 years of inadequate investment, which has led to our current affordable housing crisis. It is also an opportunity to end homelessness in Canada once and for all.”Alliance president Tim Richter says the need to act is urgent.”The good news is we know what to do to solve homelessness: targeted affordable housing investment, community systems planning, housing first, prevention and federal leadership will get us there,” said Gaetz.”Importantly, we also know solving homelessness will be far cheaper than ignoring it.”The report blames the present state of homelessness on shrinking federal investment in housing, starting in the 1980s.It says the phenomenon has changed in the last 40 years. What was once a problem involving mainly older, single men now includes women, seniors, youth and aboriginals.Among the report’s recommendations: