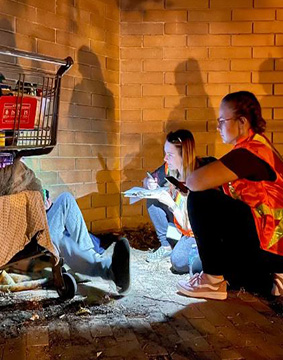 Medicine Hat says it ended homelessness a year ago, but it didn’t last long

Jan Leibel isn’t sure where she’s going to spend the night.

She’s been camping out in Medicine Hat’s Riverside Veterans’ Memorial Park, along the South Saskatchewan River, the past few nights, but she was given a $50 ticket for illegal camping and will likely have to find a new spot.

“Probably go into the bushes instead of a tent,” she said.

Leibel, 44, was sitting on a blanket next to couple of duffel bags. Aside from the hardship of sleeping in a park, she was having an exceptionally bad day. Along with the ticket, her boyfriend just ended their relationship.

“It’s hard when you’re on the street because you don’t want to be alone,” she said.

Leibel has been in and out of homelessness for most of the past year and is considered chronically homeless.

Last year, this city of 63,000 in southeastern Alberta said it ended homelessness in a declaration that drew national attention.

At that time, fewer than three people were considered chronically homeless for at least three consecutive months, enough to declare an end to the problem — the first city in Canada to do so.

However, that status lasted just five months. The city is now trying to find out how big the problem has become and what needs to be done to help those who are without shelter.

A point-in-time count, held every two years, took place the evening of Sept 26. The unofficial number before dozens of volunteers hit the streets to start the count was 17 “chronically, active homeless,” with another two dozen people considered in and out of homelessness.

The survey found the number of chronically homeless people has climbed to 19, while the number of those in and out of homelessness soared to 50. And that doesn’t include people in transitional housing, shelters, treatment centres and the local remand centre.

The problem is much bigger, depending on who you ask.

“There’s a lot of homeless, you should see it,” she said while sitting on a sidewalk behind a convenience store across from City Hall.

She says the problem has gotten worse since the closure of a local motel, which had become associated with criminal activity, according to police. The closure displaced a number of people, some of whom are in the downtown area.

Auger has lived in the community on and off for more than 30 years. She is originally from B.C.’s Okanagan Valley. Auger, who is a great-grandmother, says she’s been addicted to pain medication for years and hasn’t been in close contact with her family. She says she doesn’t want to be a burden on them.

She’s probably going to spend another night sleeping outside.

Colton McKenzie has the same plan.

The 23-year-old, who was wearing two hoodies, a vest and pajama pants, told survey takers during the point-in-time count that he has nowhere to go.

“I would stay with my mom, but she says she doesn’t have enough room, so I’m kind of out on the streets right now,” he said.

Madi Franzen, 24, is leading one of nine teams that have been dispatched to count the number of homeless people. She’s a recent graduate of an addictions counselling program and works as a housing outreach worker with a local non-profit agency.

“It’s to get an accurate picture of who we have in our city and what we can do for them,” she said.

Medicine Hat has three shelters for homeless people, including a 30-bed facility that is open between 7:30 p.m. and 7:30 a.m. The Salvation Army ran the shelter for years but recently agreed to sell the facility to the Mustard Seed.

The ownership change has fuelled speculation about the facility’s future.

“The Mustard Seed has gone ahead to purchase that building and will continue with uninterruption [sic] starting Oct. 1 to have the shelter operating,” said Colette Eirich, the managing director for the Mustard Seed in Medicine Hat.

Eirich says the shelter contract will run until March 31, 2023.

“There is a place for our homeless that do not have a permanent address, a place for them to go to be safe and have a night to sleep,” she said.

While there was so much fanfare when the community declared an end to chronic homelessness, don’t expect it to get back to that place any time soon.

Rogers says there was negative feedback after the community made the declaration.

“So there was definitely some negative attention around that.”

Rogers says her agency and the community will strive to get back to what she calls “functional zero chronic homelessness.”

“But that will take some time, given the state of all communities right now, not just here in Medicine Hat.”

She’s referring to the rising cost of living that is affecting everyone, especially people who are dealing with addictions and mental health concerns.

Their strategy remains something they call “housing first” — a commitment to provide shelter for anyone without any prerequisites or conditions, including being sober.

“It’s a fundamental human right to have a roof over one’s head and to have access to safe and appropriate housing,” said Rogers.

The city’s mayor says it’s a complex problem that is affecting people who live on the streets, their families and friends, but also business owners and people who come downtown.

“It’s a concern on a number of different levels,” said Linnsie Clark.

“All we can do is try and make incremental improvements to ensure that we’re doing everything we can to get those numbers down, and that involves the provincial and federal governments as well.”

The Medicine Hat police sergeant in charge of the daily foot patrols in the downtown isn’t too sure about the latest numbers of homeless people, but the problem is front and centre.

“Whether that’s up from before, I don’t know. But it certainly seems like they’re more visible to the public.”

The team’s job is to enforce the law, including local bylaws, meet with business owners who have concerns and direct homeless people to various supports.

“We also look for that angle where how we can help them and prevent them from continuously needing to use drugs or alcohol, or take up residence within our parks, trying to find the social service that’s able to help them and get them the help that they need. And that charging somebody may not always be the right answer,” said Bohrn.

As for Leibel, she feels safer staying outside for now.

She tried the women’s shelter, but it didn’t go as well as she hoped. She said she didn’t feel safe after another woman staying there “triggered” her, so she left.

So she’s making plans to stay in the park again, while avoiding another ticket.

Due to recent Legislative updates, the online application submission for all Housing Programs will be paused while we work on the required changes. PDF Applications are still available.